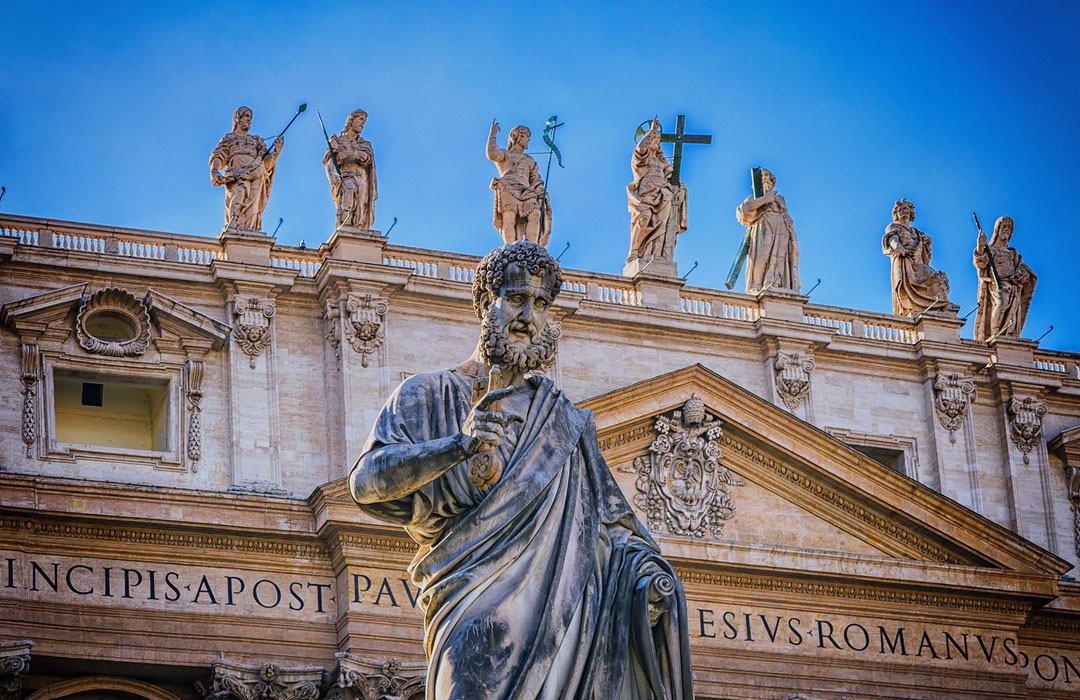 Apostle Peter was born in Besthaida near the Lake Gennesaret.

He was the brother of Apostle Andrew and along with the Apostles Jacob and John, they were fishermen.

He used to live in Capernaum, where his wife was coming from. We are certain that he was married because Jesus healed his mother in law. There is a possibility that his wife had passed away when he received the apostolic calling from Jesus.

The fact that he was a fisherman and the fact that the members of the Council called him and John “illiterate and simple” (Acts, 4:13) is an indication that he didn’t attend a rabbi school, but he might have been one of John the Baptist’s pupils.

He gradually became one of the Apostles. He was presented to Jesus first by his brother Andrew and he was definitely present to the wedding at Cana; he settled with Jesus and the other pupils at Capernaum right afterwards. He is always mentioned in the catalogues of the New Testament among the Apostles and with Jacob and John were the ones closest to the Lord, having a primary position in the apostolic circle.

His name before he joined Christ was Simon. It is not certain at which point Jesus renamed him. According to John (1, 42) when Jesus and Simon met for the first time, Jesus said that he will be named Keefas – translated as Petros (Peter) which is derived from petra (meaning rock).

Through the scripts of the New Testament it is obvious that Peter had a primary role. He was an enthusiastic, impulsive, initiative and self confident character. At the same time he seemed to change his mind easily. Even if he always had been sincere and dedicated to Jesus, he had some transitions which he managed to sooth quickly because he lost his courage because of them.

Peter – as said before – was always very close to Jesus and he see him there at the most important moments of His public action. It was after Christ’s exhortation that Peter walked on water (Math. 14, 28-32) and again after His exhortation he seined a fish that had a coin in its stomach; he used that coin to pay for the Roman tax (Math. 17, 14-17).

A little while before the Holy Passion, Jesus asked his pupils what did the people think of Him. Peter replied “You are the Messiah, the Son of the Living God”. It was at that point that Jesus said:

“Upon this rock (meaning the homology) I will establish my church”. Then He asked them not to say anything to the people and revealed them all about His suffering, His crucifixion and His resurrection. When Peter tried to talk Him out of the Holy Passion, Jesus reprehended him strongly saying: “Go behind me Satan”.

At the Last Supper Peter is anxious to know who will be the Lord’s betrayer and he assures Him he is willing to sacrifice his life for Him.

“Before the rooster crows you will refuse me three times” predicted Jesus. Later on, when the Pharisees came to arrest Jesus, Peter used a knife to cut off a servant’s ear. The Lord healed the child and said the famous quote: “He who lives by the sword shall die by the sword”. When Jesus was arrested, Peter and other pupils followed Him to the yard of the high priest, where Peter denied Jesus three times by oath. When he heard the crow, he cried in bitter tears. Lord gave him the chance to make up after his resurrection: he asked him thrice if he loved Him and bestowed him to the apostolic office.

After the Ascension there are not many information regarding Peter. We have the inspiring preaching on Pentecost that converted 3000 people and another preaching inside the Temple because of which he got arrested along with John. The Pharisees imprisoned them both but they came out in a miraculous way.

Peter seems to have taken extend apostolic action, mainly to the Hebrew people in the areas around Jerusalem. He didn’t travel to the ends of the known world like Paul did but his reputation preceded him and it was said that he could perform miracles even with his shadow (Acts:5,1-11). He would take part to the Apostolic Council on the side of the gentiles, something that caused the dysphoria of the Jewish Christians.

It is believed that Peter’s martyrdom took place on October 13th on 64 A.D. in Nero’s Hippodrome in Rome. He was crucified with his head down according to his desire, because he considered himself unworthy to receive the same death as the Lord.  His grave is supposed to be in the catacombs underneath St Peter’s Basilica in Rome, nevertheless there are many controversial opinions on the subject.

His memory is being celebrated on June 29th with St Paul, because those two are considered to be the corner stones of the Church.

Apostle Peter is celebrated on same day with Saint Paul.